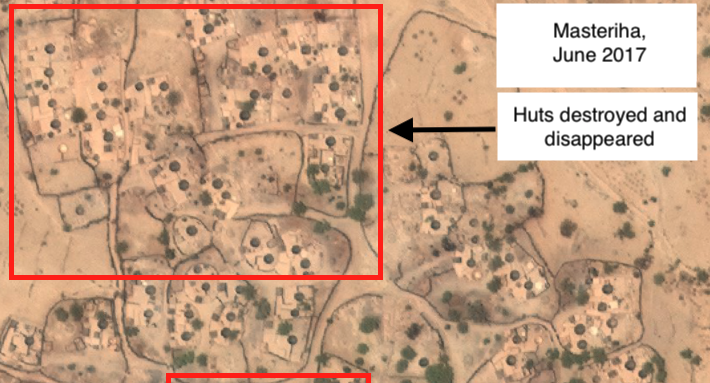 Satellite images are useful when scanning for changes in buildings and land. This kind of ‘remote sensing analysis’ also helps identifying destruction, such as aerial bombardments. In Darfur, this helped me establish which villages have been attacked by militias and have turned into ghost towns after residents fled.

Sudan’s largest paramilitary force, the Rapid Support Forces (RSF), has carried out nearly 100 attacks against towns, farms, and civilians in North Darfur and Jebel Marra since 2016.

I tracked down attacks by the RSF in local Sudanese news reports and social media, and verified them by analyzing older and more recent satellite images of villages for scorched earth and desolation. My analysis appeared on the website of the Sudanese Radio Dabanga (in PDF).

From further research together with Lighthouse Reports, a research bureau, we were able to conclude that the RSF, commanded by one of Sudan’s current leaders, has raided and torched these villages to seize control of the lands of farmers and local communities. The findings have appeared in Dutch newspaper Trouw (in PDF).

(Header photo: Masteriha in Darfur North shortly after an attack attributed by local media and the UN to the Sudanese militia. Image: TerraServer)